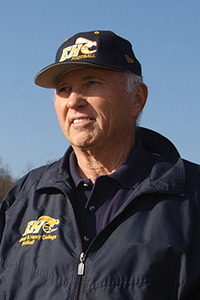 Lou Wacker, a native of Richmond, VA, was an outstanding football player at the University of Richmond before starting his football coaching career. Wacker coached at Midlothian High School before joining the staff at Hampden-Sydney College, where he built a defensive powerhouse over the next two decades as a defensive coordinator. After his 24 years with Hampden-Sydney, Wacker moved on to become the head football coach at Emory & Henry College in 1982. Coach Wacker spent 23 seasons with the Wasps and won nearly 70-percent of his games with an overall record of 164-76. The Wasps had only one winning season before Wacker’s arrival in their 13 years of existence. Wacker enjoyed 17 consecutive winning seasons with Emory & Henry. Wacker was voted Old Dominion Athletic Conference (ODAC) Coach of the Year five times and recorded more football wins than any other conference coach, on his way to a record of eleven conference championships. His leadership also produced five ODAC Players of the Year, 136 First Team All-ODAC players, 36 All-Americans and two Academic All-Americans. Wacker is a member of the Highland Springs High School Hall of Fame, the University of Richmond Hall of Fame, the Hampden-Sydney College Hall of Fame and the Emory & Henry College Hall of Fame.