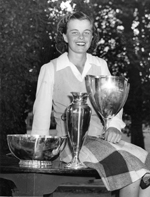 Lily Harper Martin was born in Portsmouth, Virginia on August 18, 1916. She spent her entire life in the city and became an outstanding golfer. She won the Virginia State’s Women’s Golf Championships a total of seven times, all within an 8-year span (1934-1941). Martin also won the Middle Atlantic Championship the only time she played in it. Martin married another avid golfer, Carl Martin. At the very young age of 34, he died suddenly of a heart attack. After his death, Lily Martin never had a desire to play golf again nor did she ever remarry. She passed away at the age of 73 years old. Martin is part of the only pair of siblings to be inducted into the Virginia Sports Hall of Fame. She is the sister of golfing legend Chandler Harper.