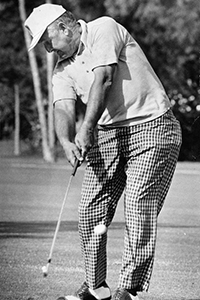 In 1947 Lew Worsham became the First Virginian to ever win the U.S. Open Golf Tournament. Having begun his career at an early age, Worsham played for Hampton High School on the Crabbers Golf Team from 1933 through 1935. By 1936, Worsham worked for the Old Dominion Golf Club in Newport News, Virginia as a shop boy. Worsham spent the next 3 years serving as Assistant Professional at the Chevy Chase County Club in Maryland during the warmer months and wintering as Assistant Professional at the Indian Creek Country Club in Florida. By 1939, Worsham landed the position of Head Professional at Burning Tree Country Club. After a two year stint in the military, Worsham returned to the States in 1946 and played in the first of nine seasons on the PGA Winter Circuit Tour. During this time, Worsham continued to hold positions as Head Professional spending 32 years at Oakmont Country Club in Pennsylvania and another 28 at Coral Ridge Country Club in Florida. Worsham won a total of 6 PGA Tour events, 3 Mid-Atlantic PGA titles and 2 Tri-State PGA Championships. He is a 3-time Western Pennsylvania Open Champion and also won a Delaware Open. In 1953, Worsham bagged the first ever $100,000 George May Tournament held at the Tom-O-Shanter Country Club, beating out rival Chandler Harper in one of the most famous golf shots on record. Harper, playing in the group just ahead of Worsham, birdied on the 18th hole, putting him 1 shot up on Worsham. At this point, Worsham would also have to birdie in order to force a play-off. Worsham’s wedge shot hit the green and rolled in for an eagle to win the event by 1 stroke. Worsham was a member of the 1947 U.S. Ryder Cup Team and inducted into the American Golf Hall of Fame in Foxburg, Pennsylvania in 1977.