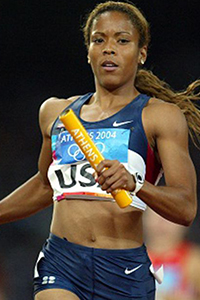 LaTasha Colander, a native of Portsmouth, VA, is a graduate of Wilson High School and later went on to run track at the University of North Carolina at Chapel Hill. At UNC, Colander won 14 ACC titles, was an All-American, and led the Tar Heels to eight ACC team championships. Colander was a member of both the 2000 and 2004 United States Olympic Teams, and won a gold medal as part of the 4×400 meter relay team in the 2000 Olympics in Sydney, Australia. In 2000, Colander was the U.S. champion in the 400 meters and was part of the relay team that broke the world record in the 4×200 meters. Colander Clark repeated as U.S. champion in 2001.