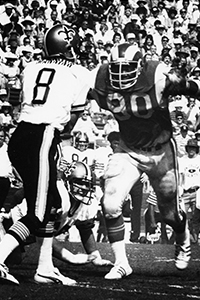 Larry Brooks is a native of Prince George, Virginia and attended Prince George High School.  In 1967, he was selected as an All-Central District choice as a defensive end.  Brooks furthered his education and attended Virginia State University, where he was named to the Associated Press Little All-American team as a defensive tackle in 1971.  He also was named Virginia Small College Lineman of the Year and received all-conference honors.

A 14th round draft choice of the Los Angeles Rams, Brooks was a starter at defensive tackle for 10 years.  He was named to the Pro Bowl five straight years 1976-80, including being named All-Pro from 1977-79 while on his way to starting in the team’s only Super Bowl appearance in 1980. Brooks had 17 quarterback sacks in 1976 and led the defensive line in 1979 in total tackles, had 6 quarterback sacks and knocked down 4 passes.  Before the 1980 season, he led the defensive line in tackles, had 8 ½ quarterback sacks and 1 forced fumble.   The streak ended in 1981 when he was sidelined by a knee injury and surgery.

Starting out with the Los Angeles Rams in 1983 as the assistant defensive line coach, Brooks spent eight years with the team where he was paired with Seahawks Defensive Coordinator Fritz Shurmur.  In 1991, Brooks returned to his alma mater in 1992 where he served as Virginia States’ assistant athletic director and assistant football coach where he was subsequently named athletic director in 1993.  Brooks united with Mike Homgren’s Seattle staff after joining him in 1994 as the Green Bay Packers defensive line coach.  He led a 1998 Packers defensive unit that held its’ opponents to 281.7 yards a game, which ranked fourth in the NFL, including a rushing defense that allowed just 90.1 rushing yards a game.  Leaving a defense that finished fourth in the league in sacks with 50, he takes on the task of coaching the league’s second leading sack squad (53), which was just one off the league high.  Having tutored all-time sack leader Reggie White (192.5), he now accepts the opportunity to groom the NFL’s top sackmaster over the past three seasons in Michael Sinclair (41.5).  His line played a major role in Green Bay’s Super Bowl XXXI success when the defense allowed a league low 259.8 yards per game and a meager 3.5-yard per rush average.