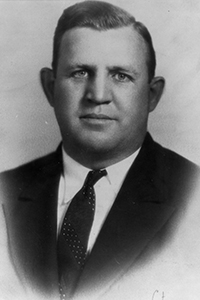 The late Karl A. “Dick” Esleeck is the holder of one of the finest coaching records in the history of the Virginia High School League.  Perhaps the greatest achievement by Esleeck before cancer claimed his life in 1952 was coaching state championship football teams at three different high schools.  In 1936, he brought Hampton its first Virginia crown in football.  His John Marshall teams of 1940 and 1941 won back to back state titles.  In 1947, he gave Woodrow Wilson its first championship in 20 years.

Most of Esleeck’s 49 years were devoted to football.  A native of Portsmouth, the son of Richard and Sara Esleeck, began a career in athletics at Wilson in the early 1920’s.  Esleeck was the star fullback on Wilson’s eastern championship team in 1922.  One of the school’s most versatile performers, he was used at nearly every position on a state championship baseball team and was a varsity basketball player.  He continued his athletic success at Virginia Tech, where, in addition to playing football, he became one of the outstanding middleweight boxers in the South.  After graduation at Virginia Tech, Esleeck remained as a head coach in boxing and assistant coach in football.

In 1933, he left Tech to launch a brilliant high school coaching profession.  He never had a losing season in 13 years, becoming the first man to produce state championship teams at three different schools.  His two title winners at John Marshall were undefeated teams.  The Justices held the opposition scoreless in 17 consecutive games.  Esleeck left John Marshall with a coaching record of 26 straight games without a defeat.

After two years as a bowling center manager in Newport News, Esleeck returned home in 1944 to coach at Wilson.  The Presidents immediately became one of the state’s grid powers.  The 1945 team missed a championship by losing only to eventual winner Granby.  In 1947, he directed a Wilson team that many regard as the finest in the school’s history.  The Presidents won ten in a row and only one team was able to score on them.  At the close of the 1947 season, Esleeck accepted a position as head football coach at the University of Richmond.

Esleeck was struck down by cancer in January of 1952 and fought it for 11 months.  Maryview Hospital officials said he had more visitors than any patient in the history of the hospital.  He will always be remembered as one of Virginia’s finest athletes and for his many contributions to sports in the state.