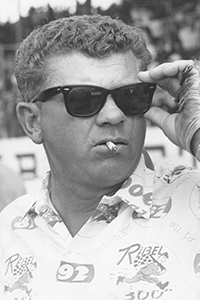 Joe Herbert Weatherly attended Norview Elementary, James Madison, and Maury High School in Norfolk and at the age of fifteen acquired his first motorcycle. On December 12, 1942, Weatherly, who had been employed by Pepsi Cola in Winston-Salem, N.C. as a transport truck driver, entered the U.S. Army. On November 23, 1945, he received an honorable discharge from the 809th Aviation Battalion Engineers of the U.S. Air Force with the following: 5 battle stars, Good Conduct Medal, Victory Ribbon, American Theater Service Ribbon, and the European-African Middle Eastern Service Ribbon. In a seventeen-year period Weatherly won national championship titles in motorcycle racing from 1948-1949. In 1950, he transferred his racing activities to stock cars and won the first race in which he competed. In 1952, Weatherly was runner-up to Frankie Schneider of Lambertville, NJ for the national modified championship of NASCAR, and in 1953, he won the national modified championship. In 1955, Weatherly became a member of the famed Ford Racing Team of Holman-Moody, and in 1961, was voted by the fans as the most popular driver of NASCAR√ïs Elite Grand National division. In 1962, he drove a Pontiac engineered by Bud Moore, of Spartanburg, SC to the Grand National Championship and repeated as Grand National Champion in 1963. Weatherly was inducted into the National Motorsports Press Association Hall of Fame, which is housed in the Joe Weatherly Stock Car Museum, located at the Darlington Raceway in Darlington, SC. On January 19, 1964, Joseph Weatherly passed away, but “The Clown Prince of Racing” will always be remembered as one of Virginia’s greatest racing legends.