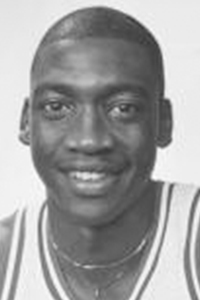 Johnny Newman, born in Danville, VA and 1986 graduate of the University of Richmond, led the Spiders in scoring from 1982-1986 and is the all-time leading scorer for Richmond with 2,383 points. Newman had a .532 career field goal percentage and an .800 career free throw percentage. He was named to 8 All-Tournament teams and was the MVP for the 1984 CAA Tournament. In 1986, Newman was drafted in the 2nd round (29th overall) by the Cleveland Cavaliers. In his 16-year career in the NBA, Newman was a member of the Cleveland Cavaliers, the New York Knicks, the Charlotte Hornets, the New Jersey Nets, the Milwaukee Bucks, the Denver Nuggets and the Dallas Mavericks. He totaled 1, 169 games in his career where he started for 512 of those. Newman averaged 16 points per game in the 1988-1989 season with the New York Knicks, leading the team to the Atlantic Division Title. He is a member of the Colonial Athletic Association Men’s Basketball Silver Anniversary Team (1985-2010) and is a member of the 1991 University of Richmond Athletic Hall of Fame.