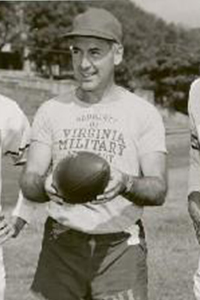 Our next inductee was born and raised in Lawrence, Massachusetts. He went on to Villanova University, where he was a three-year starter on the football team. After graduation, he went on to coach football at Malvern Prep School in Philadelphia, his alma mater Villanova, and Loyola of Los Angeles before beginning a legendary career at Virginia Military Institute. This inductee joined the VMI football coaching staff in 1952, as an assistant under Tom Nugent. He was promoted to head coach after just one year, and went on to lead the Keydets to their longest winning streak in history, which included five state championships, four Southern Conference championships and six straight winning seasons (1957-62). These years included the undefeated team of 1957, ranked #20 on the AP Poll, the only VMI football team to ever hold a national ranking. His boys also recorded a winning streak of 18 games in 1957-58, the longest in Keydets history, and a streak of 14 wins just one season later, earning him Southern Conference Coach of the Year honors in 1957 and 1959. In 1966, this coach went on to Georgia Tech to work as an administrator, a post he held for 13 years. However, he was not forgotten at VMI. In 1979, he received a special citation of the VMI Sports Hall of Fame, and was also made an honorary alumnus of the school. In 1978, his players and fellow coaches established a scholarship in his name, which provides assistance to upper-class football players who exemplify the traits he demanded of his players: discipline and hard work, both on and off the field. Of his 278 players coached, 26 earned medical degrees, 22 law degrees, seven their Ph.D.s, and two were awarded Rhodes Scholarships. In his own words:  “I’ve never tried to run a popularity contest. I was a tough coach and hopefully a strong and fair administrator. Athletics, like life, requires discipline and sacrifice.”