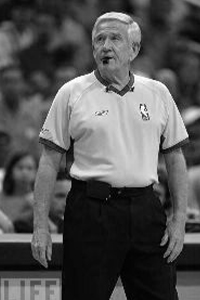 Jess Kersey, native of Newport News, VA, devoted 36 years as a basketball official in the American Basketball Association and the National Basketball Association. His officiating career started with the ABA where he worked for 5 years and refereed the 1975 ABA All-Star game plus many Playoff games. His 31 year NBA career includes 2,200 NBA games, 5 NBA All-Star games, 190 NBA Playoff games and 19 NBA finals. His officiating career was in the era when the ABA merged with the NBA and it gave him the opportunity to manage games with all the great talent the league offered. League Commissioner David Stern says “While [his statistics] alone are impressive, the truest measures of Jess’s success are the consistent excellence, integrity, and work ethic he displayed in one of the most difficult jobs in all of sports.” Jess also officiated in Puerto Rico for twelve years. He is a member of the Virginia Fast Pitch Softball Hall of Fame and was named to the All-World Team in 1969 as a second baseman. Jess is winner of his local sports club’s Henry Jordan Award and was also inducted into the Lower Virginia Sports Hall of Fame in 2002.