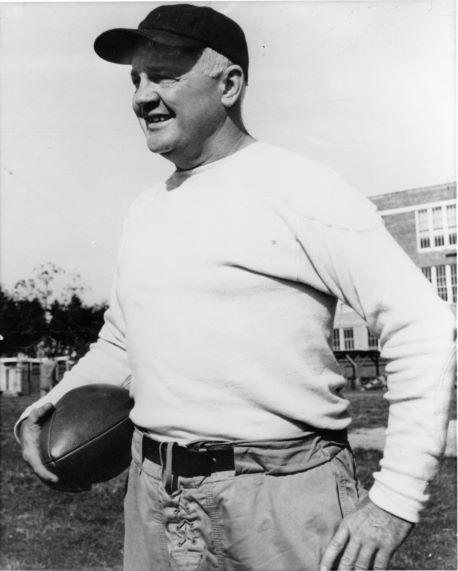 Suey Eason was born on April 19, 1907 in South Norfolk, Virginia and enjoyed a successful sports career at South Norfolk High School.  He enrolled at the College of William and Mary in 1924, where he was an outstanding football and baseball player, graduating in 1928, with a degree in chemistry.

Eason signed a ten-year contract to direct athletics and coached football at William & Mary, however, resigned from this position two months later.  His most satisfying game happened in 1959 with Hampton playing Granby High School at Darling Stadium in Hampton, Virginia.  His son posted the two longest runs of his career that day, 70-78 yards, to lead the Crabbers to victory and Coach Eason’s 200th win as a high school coach.

Coach Eason retired from coaching after the 1960 season to become Hamptons’ first full-time Director of Recreation.  In 1961, he wrote and published his first book “The Crying Towel” which covered his coaching experiences and philosophy.  He was inducted into the William & Mary Athletic Hall of Fame and won Man of the Year by the Peninsula Sports Club on two different occasions along with many other awards.

Suey Eason passed on February 5, 1989 but he will always be remembered as one of Virginia’s finest athletes.