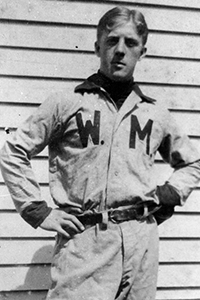 James Driver was a native of Harrisonburg.  He won letters in four sports at William and Mary and at the University of Virginia in football, basketball, baseball and track.  During one year, he was captain of all four teams.

Driver was a coach and athletic director at the University of South Carolina, and a member of the Olympic boxing committee for 12 years.  He judged boxing at the 1936 Olympic games.  One of Driver’s personal career highlights was playing against the legendary Jim Thorpe when Virginia lost a 22-5 decision in 1910.

Driver passed away in 1975 at the age of 86.  He will always be recognized and considered to be one of Virginia’s greatest athletes.