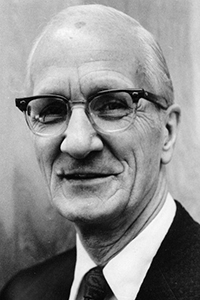 The first ever Virginia Sports Hall of Fame inductee honored for officiating, Shirley presided over 2,000 basketball games across a span of 33 years before retiring.  At the time Shirley stated “I can still toot the whistle and jump up and down, but I can’t go the length of the court anymore.”  He then took on dual roles with the Southern Conference, Supervisor of the League’s Officials and Assistant to the Commissioner.

Shirley began his avocation of officiating while still at Eastern High School in Washington D.C. where he was also a guard on the 1931 InterHigh title winning team.  He continued both playing and officiating at George Washington University while earning a BS and MA.  He was a teacher, principal and coach of swimming and basketball for many years in the D.C. school system.

Joining the D.C. Officials Association in 1936, it was not until 1948 that Shirley had to make the call of whether to continue to officiate college games or move on to the pros.  Shirley stuck with amateur basketball and never looked back.  His decision allowed him the opportunity to travel not only the United States, but also the world.  He was the Chief Referee for the 1959 Pan American Games hosted in Chicago and the only American official at the 1960 Olympic Games in Rome.

For the Games in Rome, Shirley’s draw assigned him to the game in which the Brazil upset the U.S.S.R., becoming the only country to have defeated the Soviets other than the U.S. team.  “The tension was terrific in that contest,” recalled Shirley, “it was a thriller all the way.”