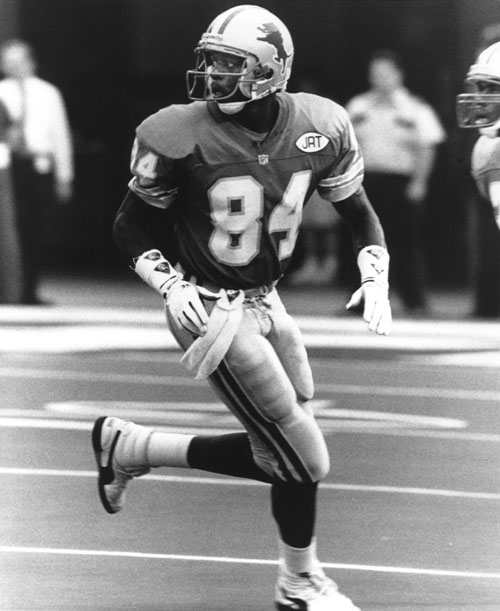 Herman Moore, born in Danville, VA, played football in high school, mostly as a kicker as well as tight end. He attended the University of Virginia where he was a 2 sport athlete, football and track and field. He ranks 2nd all-time in career receptions and holds the school record in the high jump. He was a two-time All-American at Virginia, earning first-team honors in 1990. While at Virginia he became the all-time ACC leader for receiving yards in a single season with 1,190 in 1990. He established UVA career records for TD receptions (27) and receiving yards (2,504). In 1991, he was the 1st round draft choice of the Detroit Lions. He went on to play for the Lions through the 2001 season and finished his career with the New York Giants. Through his professional career, he was selected to four Pro-Bowls, from 1994-1997. He also made the 1st team All-Pro three times throughout his career and the 2nd team All-Pro once. In 1995, he set an NFL record with 123 single season receptions. Also in 1995, Moore and teammate Brett Perriman became the first wide receiver duo to each catch more than 100 receptions in the same season. In 1998, Moore received the inaugural All-Iron Award for his performance in the Thanksgiving Day game. He finished in the top 10 four times in the NFL in receptions, receiving yards and receiving touchdowns. His 12 year career included 670 receptions; 9,174 yards and 62 touchdowns.