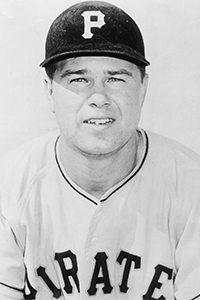 Hank Foiles was born in Richmond in 1929.  He moved with his family in 1933 to Norfolk where he entered Granby High School in 1944, starring in football, baseball, basketball and track. He earned 3 letters in football, 4 letters in baseball and 2 in track.

Foiles was All-Foreman Field, All-Tidewater, All-State and All-Southern in football during the 1946 season and that same year was named “Norfolk’s Outstanding Football Player.”  He has the distinction to have played in the very first Oyster Bowl Game and has been selected to the All-Time All-Tidewater Golden Team which encompasses the years 1932-1982.  During his high school track days, Foiles set a Virginia State Record in the javelin and was named to the Look All-American Track Team in 1946.

Following high school, Foiles rejected numerous college scholarship offers in order to pursue a professional baseball career. He signed with the New York Yankees in August of 1947.  His career as a catcher spanned 16½ years, 11 of those in the majors in both the American and National Leagues.  Foiles was named to the National League All-Star Team in 1957, singling in his only time at bat as a pinch hitter.

Foiles retired in 1964.  His lifetime major league batting average is an impressive .242.  His lifetime fielding average in the Minors totals .978 and in the majors .986.  He holds a .392 slugging average and knocked in an average of 3.2 home runs for every 100 times at bat.