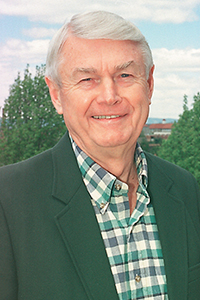 Dean Ehlers was the first director of athletics for James Madison University, a position he held for 22 years. When he arrived at JMU in 1971, it was a small program without football, a conference affiliation, athletics grants-in-aid and with limited athletics facilities. Now, it is nationally recognized program. Many notable events happened during Ehlers’ tenure as leader of JMU athletics including playing in the College World Series, moving to the Atlantic 10 conference in football, winning a national championship in archery and ranking nationally in men and women’s soccer as well as swimming. Also, JMU’s men’s basketball team won games in three straight NCAA Tournaments from 1981-83, and its women’s basketball team advanced to NCAA play five times from 1986-91. He also worked on the construction of Bridgeforth Stadium, the Convocation Center and several other athletic venues. Serving as president of the Virginia Sports Hall of Fame was also a highlight. Ehlers was president during the founding of the Colonial Athletic Association, and the conference established the Dean Ehlers Leadership Award in recognition of his career contributions to intercollegiate athletics. The annual award recognizes male and female basketball student-athletes who “Embody the highest standards of leadership, integrity, and sportsmanship through their academic and athletic achievements.”