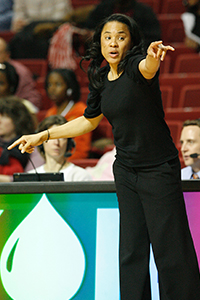 Dawn Staley of Philadelphia came to the University of Virginia women’s basketball program in 1989. That year, she won the ACC Rookie of the Year Award, and over the next four years, racked up three Kodak All-American honors, two National Player of the Year awards, the Honda-Broderick Cup (1991), and three Final Four appearances. Staley has earned 10 gold medals and one bronze in international competition, including three Olympic gold medals (1996-2000-2004). She has played in the WNBA since 1999, making five All-Star Game appearances and earning her way onto the WNBA All-Decade team. She has also coached Temple University√ïs women√ïs basketball team since 2000-01, and was named the Atlantic 10 Conference Coach of the Year in 2004 and 2005. In 2008 she left Temple to become the head coach at the University South Carolina, where she had led the Gamecocks program to 2 National Championships in 2017 and 2022. Staley is a 2013 inductee into the Naismith Memorial Basketball Hall of Fame as a player.