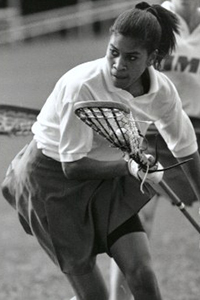 Cherie Greer Brown is a former Virginia women’s lacrosse All-American. A three-time first-team All-American for the Cavaliers, Greer was the NCAA Division I Defensive Player of the Year in 1994 and was the first lacrosse player to have her jersey retired at Virginia. During her career, the Cavaliers won two NCAA Championships – the 1991 and 1993 titles. Greer was also a 14-year US player and received the Beth Allen Award at the US Lacrosse Women’s Division National Tournament in 2000, which is given to “a highly skilled, creative, and disciplined player who consistently makes a positive contribution to the team effort. Such a player shall show awareness and understanding of the spirit of this unique game and exemplify character traits of loyalty and sportsmanship.” She was a member of the 1993, 1997, 2001 and 2005 US Women’s World Cup teams, winning three world championships. She was named the Most Outstanding Player of the Championship Game in the 1997 and 2001 World Cups. In 2000, Greer was named a member of the Lacrosse Magazine All-Century Team. She was also inducted into the US Lacrosse Philadelphia/Eastern Pennsylvania Chapter Lacrosse Hall of Fame in 2005 and the National Lacrosse Hall of Fame in 2009.