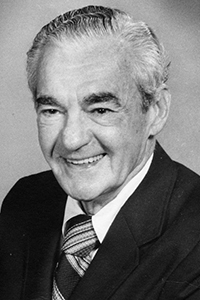 A scholar in English and Latin at the University of the South, Chauncey Durden was a sports editor of the Richmond Times-Dispatch for approximately 40 years. In that time he became one of the most respected columnists in the nation. Durden’s editorial opinion exercised a strong influence in athletic programs throughout Virginia. He was honored for his writings on horse racing, baseball and college football. He also played a lead role in Richmond√ïs successful efforts to gain a Triple-A baseball franchise in 1954.