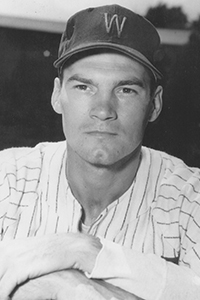 Before his long career on the diamond in Major League Baseball, Chuck Stobbs became a legend at Norfolk’s Granby High School. A superb athlete, Stobbs led Granby in three sports and few doubted that this local hero would not find a niche in professional sports. Named Virginia Player of the Year in high school in 1946, Stobbs was an all-state basketball star and also led the Granby Comets football team to three straight undefeated seasons. He was selected to the All-Foreman Field Team, All-Tidewater Team, and All-Southern team. Although his football and basketball numbers were impressive, his future was in baseball. He was chosen to represent the East team on the Esquire All-American Baseball team and shortly after high school signed a bonus contract with the Boston Red Sox. His career began in Lynn, Massachusetts at the Red Sox Class B affiliate. Before the season was over this hard throwing rookie found himself at Fenway Park, matching his arm with the game√ïs best. Beginning in 1947, Stobbs spent 15 years as a pitcher in the major leagues. The same arm that seemed unstoppable for the Granby Comets football team also served Stobbs, the pitcher, well. In seven of his big league seasons, he collected 10 or more wins. During his lengthy career, he accumulated over 100 wins and appeared in 460 games while pitching for the Boston Red Sox, Chicago White Sox, Washington Senators, St. Louis Cardinals and Minnesota Twins. When his playing career ended, he coached in both the Kansas City Royals and Red Sox organizations. The Virginian-Pilot recently named Chuck Stobbs one of Tidewater’s greatest athletes of the century. Chuck Stobbs has hung up his cleats and is now retired, living in Sarasota, Florida.