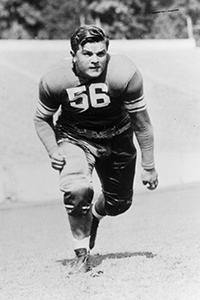 Charles “Bolo” Perdue was born May 10, 1916 in Thomasville, North Carolina. He graduated from Duke University with a B.S. Degree in 1940 and received his Masters Degree from Columbia University in 1947. Perdue played with the New York Giants in 1940 and volunteered for the U.S. Navy. He was commissioned an Ensign in 1942 and was the Naval Air Operations Control Officer in 1942. Perdue was honorably discharged as a Lt. Commander in 1945. While attending Columbia University in New York, Perdue played for the Brooklyn Dodgers. He was recalled to active duty in the U.S. Navy in 1952. Perdue served as President of the Virginia Education Association in 1968 and as President of the Virginia Committee Southern Association of Colleges and Schools. Perdue served as President of the Tidewater Chapter of the Duke Alumni Association from 1972-74. Perdue was an All-State halfback and an All-State heavyweight wrestling champion. He was one of the original “Iron Dukes” and scored the touchdown against Pitt that sent Duke to the Rose Bowl. His 1938 football team was undefeated, untied and unscored upon. Perdue was an All-Southern end at Duke and named to many All-American teams. In 1940, he was one of twenty-two players selected to play in the “East-West” game in San Francisco. While playing for the St. Mary√ïs Preflight team in 1944 he was also named first team All-Service.