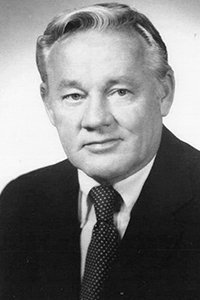 Bob Thalman has already distinguished himself as an outstanding figure in Virginia sports history. A 47-year sports veteran as a player, coach, and administrator at the high school, college, and professional levels, Thalman dedicated 26 years of his experience to athletics in the Commonwealth of Virginia. Football was his passion and the foundation upon which Bob Thalman established his greatest athletic and coaching achievements. As head coach at the Virginia Military Institute for 14 years (1971-84), Thalman held the longest tenure of any football coach in the Institute’s history. After a rebuilding period, his Keydets posted five winning seasons between the years 1974 and 1981 and won two Southern Conference championships. Prior to his stint in Lexington, Thalman began his career at Benedictine High School and Norview High School. He then served three years as an assistant coach for Hampden-Sydney College before becoming Head Coach in 1955. As Head Coach, he posted a winning percentage of .736 and earned two Mason-Dixon Conference championships. After leaving Hampden-Sydney, Thalman continued his career as an assistant coach for three years at Georgia Tech and for seven years at the University of North Carolina. A former Sergeant in the United States Marine Corps (1942-46) and survivor of the Iwo Jima, Thalman trained his players during his coaching career with what he learned in combat: strength, discipline, and determination. Along with his successful coaching career he has proved himself an intense athlete and a leader in sports administration. Thalman was a varsity football player at the University of Richmond, and enjoyed a brief career in the American Professional League with the Richmond Rebels (1947-48). During his coaching career at Hampden-Sydney, he also served as Athletic Director for the college (1956-59). Thalman, a dedicated community activist, founded and was president of Operation Manhood (1989-92), a non-profit, no-cost camp for Virginia√ïs less fortunate student-athletes. Bob Thalman√ïs induction into the Virginia Sports Hall of Fame is a fitting tribute to a gentleman who devoted his life to preparing young men for the challenges they would face in their lives.