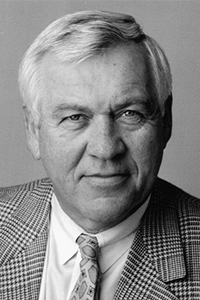 William H. Millsaps, Jr. is a native of Daisy, Tennessee and attended the University of Tennessee. He worked at the Knoxville Journal for three years before joining the Richmond Times-Dispatch as a sports reporter in September of 1966. Millsaps was named associate sports editor in 1972 and executive sports editor in 1973. In 1977, he served as sports editor before serving as managing editor in January of 1992. In January of 1992, he became managing editor of the newspaper and was promoted to senior vice president and executive editor in January of 1994. In 1993 and again in 1996, Millsaps’ leadership was recognized when The Times-Dispatch won the Virginia Press Association’s highest honor, the W.S. Copeland Award for public service and journalistic integrity. Millsaps was selected as Virginia’s sportswriter of the year 11 times in voting by state members of the National Sportscasters and Sportswriters. He is a former president of the U.S. Basketball Writers Association and Associated Press Sports Editor. Millsaps’ work has also appeared in Sports Illustrated and the U.S. Golf Association Journal. On June 24, 2011 Millsaps became the recipient of the 2011 Red Smith Award, the top sports journalism award in the nation, presented by the Associated Press Sports Editors (APSE) to a person who has made “major contributions to sports journalism.”