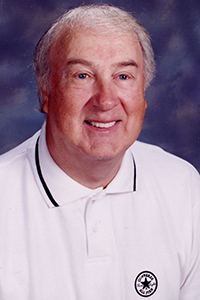 Bill Littlepage, born in Pleasant Hill, VA and attended Bridgewater College, is known as the winningest basketball coach in Virginia High School League AAA history with an overall coaching record of 755-320 (70.2%). He is one of only two coaches to ever win over 700 games at a VSHL school and is the 2nd winningest basketball coach in overall VSHL history. He spent 44 years as Head Coach at Hopewell High School and saw 26 VHSL Regional Tournament berths and 6 State Tournaments. His teams won the State Title in 1972 and were runner-up in 1986 and 1996. He had 18 District Championship years (11 regular season titles, 14 tournament titles) and 4 VHSL Regional Championships and 4 runner-ups. Littlepage was the recipient of numerous Coach of the Year awards at the district, regional, state and national level. In 1990, he was inducted as a charter member into the Virginia High School Hall of Fame, and in 1993 he was named National Coach of the Year by the National High School Coaches Association. In 1997, Littlepage was inducted into the National High School Athletic Coaches Association Hall of Fame, and in 1998, he was inducted into the Bridgewater College Athletic Hall of Fame. In 2004 he was inducted as a charter member to the Hopewell Athletic Wall of Fame.