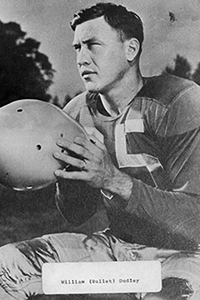 There has been only one football player in the history of the sport to win Most Valuable Player honors in collegiate, armed forces and professional competition and that player is Bill Dudley.

At 5 ft. 10 in., 152 lbs., Bill was considered by many recruiters to be too small for college football. University of Virginia coach Frank Murray disagreed and gave him a chance. By 1941, Bill Dudley had gained 23 pounds, led Virginia to an 8-1 record, and received the Touchdown Club Award of Washington D.C. and the Maxwell Trophy, as the nation’s outstanding player.   He garnered his MVP award at the collegiate level as well as becoming Virginia’s first All-American.

Bill was the Pittsburgh Steeler’s #1 draft choice for 1942.  By September of 1942, he had decided to enlist in the Air Force.   Due to the quantity of available pilots, he never actually left until December. This allowed him to finish his first year with the Steelers and lead the NFL in rushing.

Bill spent his service time in Saipan and Texas.   It was while he was an instructor at Randolph Field in Texas that he played with the Randolph Ramblers.   The team was undefeated and he picked up the MVP honors for the armed forces.  In October of 1945 and 1946, Bill was back with the Pittsburgh Steelers, where he led the league in rushing, punt returns and pass interceptions.   He now received his third MVP, this time as a professional.

Bill completed his outstanding playing career with the Detroit Lions in 1950-1951 and the Washington Redskins in 1950-1951 and 1953.   He became the assistant coach at the University of VA in 1954-1955 and for the Steelers in 1956.  The sense of responsibility that led him to join the Air Force at the beginning of his professional career led him to participate in his community. He coached Little League baseball, became a member of the Rotary Club and served four terms in the Virginia House of Representatives. Dudley is also a member of the College Football Hall of Fame, the Pro Football Hall of Fame, and the Washington Redskins Hall of Fame.