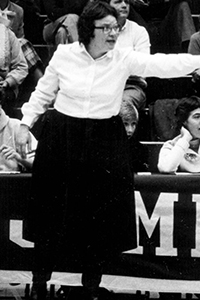 Betty Jaynes, a native of Covington, Georgia, came to Madison College (now James Madison University) in 1968 as an assistant professor of physical education.  She served as the head women’s basketball coach from 1970 to 1982, amassing a notable 142-114 record.  But Jaynes is best known for her contributions as an administrator.  She founded the Women’s Basketball Coaches Association, where she was both Executive Director and CEO over her 19-year tenure.  Jaynes is an inductee of the Women’s Basketball, National Association of Collegiate Directors of Athletics, and Georgia Sports Halls of Fame.