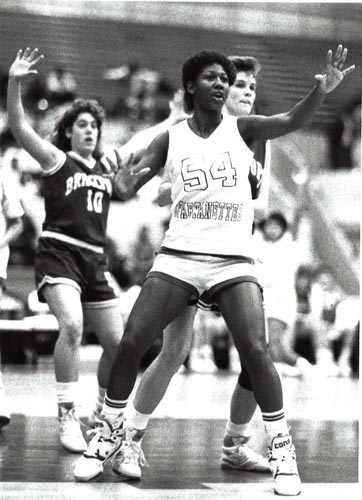 Tracy Saunders success on the basketball court at John F. Kennedy High School in Suffolk, Virginia, led to a scholarship offer from nearby Norfolk State University. A power forward with quick hands and feet, Saunders led the Lady Spartans basketball team to unprecedented success during her four years on campus. Saunders finished her career with 2,084 points, 978 rebounds, and 327 steals. From 1987-1991, the Norfolk State Women’s Basketball team had a combined record of 95 wins against only 25 losses. A third team All-American as a junior, Saunders’ senior year during the 1990-1991 campaign will go down as one of the greatest in school history. Led by Saunders, the Lady Spartans finished the year 33-2, were crowned CIAA Champions, and advanced to the NCAA Division-II Final Four. Saunders was named All-CIAA for the third consecutive year, the CIAA Conference Player of the Year, and the 1991 Kodak-NCAA Division II National Player of the Year. In that same year, Saunders was presented with the Honda Award, which recognizes the best female athlete across all sports in NCAA Division II. Saunders is one of four Honda Award winners from the state of Virginia. She has previously been honored with induction into the Norfolk State Athletics Hall of Fame, the Hampton Roads African American Sports Hall of Fame, and her number 10 jersey has been retired by Norfolk State University.