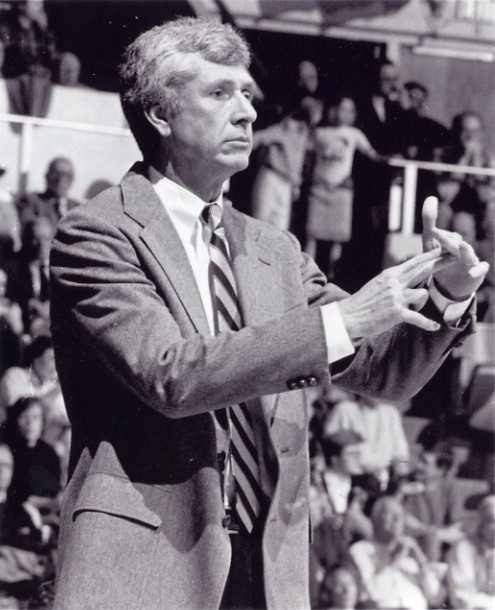 Terry Holland, the winningest basketball coach in the University of Virginia history, has a name synonymous with excellence.  His coaching and administrative achievements are a testament to his character and dedication to sports.

Holland was an outstanding three-sport high school athlete before attending Davidson, where he was a basketball standout under head coach Lefty Driesell.  During his senior year, he led his team to a 22-4 record and Davidson’s first ever Top Ten national finish.  Following his graduation in 1964, he assisted Lefty Driesell and then succeeded him as head coach in 1969.  In five seasons at Davidson, Holland compiled a record of 92-43 and was named Southern Conference Coach of the Year three times.

In his 16 years as head basketball coach at Virginia (1974-90), Holland compiled a record of 326-173 and guided the Cavaliers to the NCAA tournament eight times, reaching the Final Four twice, and the NIT four times, winning the championship once in 1980.  While at UVA, Holland was named Atlantic Coast Conference Coach of the Year in 1981 and 1982 and twice finished as runner-up for National Coach of the Year honors.

Holland left UVA to become Athletic Director at his alma mater, Davidson College, in 1990.  He returned to Virginia as athletic director in 1995 and was instrumental in the development and upgrading of the athletic facilities.  Under Holland’s integrity and vision, Virginia’s 24-sport intercollegiate program has made great strides towards becoming one of the top athletic programs in the country.

An advocate for success in the classroom as well as on the field, Terry Holland oversaw an athletic program at UVA that is nationally renowned for its dual commitment to athletic success and academic excellence.  Throughout his coaching career, Holland had a remarkable 95% graduation rate among his players.

His influence on the University of Virginia’s athletic program has made him a prominent role model in Virginia sports history.  Terry Holland’s induction into the Virginia Sports Hall of Fame is a fitting tribute for a talented athlete who became a successful coach and a dedicated, visionary leader.