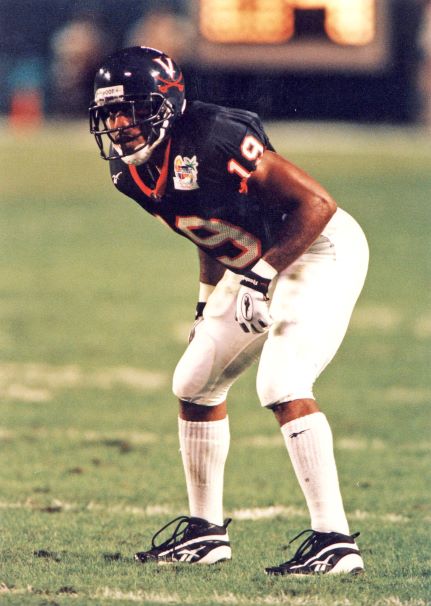 Rondé Barber, a native of Roanoke, VA, graduated from Cave Spring High School in 1993 before heading to the University of Virginia where he was a three-time All-ACC selection for the Cavaliers. After the 1994 season, Barber was named the Atlantic Coast Conference Freshman of the Year. Barber made 15 career interceptions at the University of Virginia and following the 1996 season, he declared for the NFL Draft. Rondé Barber was taken in the third round of the 1997 NFL Draft by the Tampa Bay Buccaneers. Barber spent his entire 16-year career with the Buccaneers and accumulated five Pro Bowl selections, three first-team All-Pro selections, and helped capture the team’s first Super Bowl in franchise history in Super Bowl XXXVII against the Oakland Raiders. On January 31, 2010, Barber was named to the NFL 2000s All-Decade Team. At the time of his retirement in 2012, Barber was the Buccaneers all-time interceptions leader, had recorded the most quarterback sacks by an NFL cornerback and was the only member of the 40/20 club (over 40 interceptions and over 20 sacks). Career totals include 1,025 tackles, 28 quarterback sacks, 47 interceptions and 12 touchdowns. Photos courtesy of the Tampa Bay Buccaneers