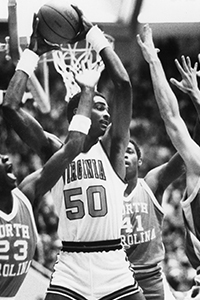 One of the most heralded cagers of all time, Ralph Sampson dominated the collegiate game during his brilliant four-year (1980-83) career. Leading Virginia to a new level of national prominence and success, the 7-4 center helped guide the Cavaliers to a NIT championship as a freshman in 1980 and to three NCAA appearances starting in 1981. The Sampson-led Cavaliers won 112 of 135 games and were in the Top 10 in both major wire service polls for an incredible 48 consecutive weeks. The Cavaliers ranked below fifth in either poll for just one week during that span. The three-time National and ACC Player of the Year also left his mark in the UVA record books. Known almost as much for his unselfish team play as he was for his outstanding athletic ability, Sampson nonetheless finished as Virginia√ïs third all-time leading scorer (currently fourth with 2.28 points) and holds UVA career records for rebounding (1,511), most field goals made (899), most blocked shots (462) and most dunks (253). Among his numerous accolades, Sampson was a four-time All-American and won two straight Eastman Awards, two John R. Wooden Awards and three consecutive Rupp trophies. Following his four-year collegiate stint, Sampson was picked by the Houston Rockets as the NBA’s number one draft choice and went on to earn NBA Rookie of the Year honors. During his nine year NBA career, he helped lead Houston to the 1986 NBA finals and later played for the Golden State Warriors, Sacramento Kings and Washington Bullets.