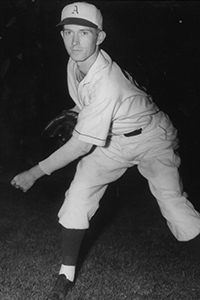 In the summer of 1939, he pitched for the Sanford, North Carolina semi-pro team winning the Tobacco State League Championship. His record with this team was 12 wins, no defeats, and 1 tie. The team won the State Semi-Pro Tournament at High Point, North Carolina, and in two games he struck out 40 men and was selected as the leading pitcher of the tournament.

Vaughan was a major league baseball pitcher with the Philadelphia Athletics in 1940, 1941, and in spring training again in 1946. At that time, he was traded to the New York Yankees and sent to their American Association team at Kansas City in 1946 but retired after spring training in 1947.

While at Toronto in 1941, he was an International League All-Star and returned to the Athletics at the end of that season. In 1944 while in the Air Force and playing at Buckley Field in Denver, Colorado, he sustained a shoulder injury. Upon returning to civilian life in 1946 and the Kansas City Blues of the American Association, he won 4 and lost 2 decisions with an overall Kansas City earned run average of 2.22.