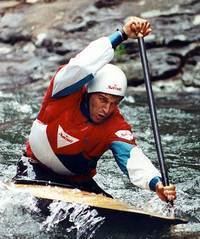 From Oakton High School, in Fairfax County, Jon Lugbill is widely considered to be one of the greatest canoe slalom racers in the history of the sport. The University of Virginia alumnus, began canoeing in the Washington D.C. area in the 1970’s, and soon would become a World Champion and record holder, accomplishing feats that have yet to be duplicated. Beginning with his first individual World Championship victory in 1979, Lugbill would add four more individual World Championships (’81, ’83, ’87, and ’89), and another seven C-1 team race World Championships to his resume, for a total of twelve World Championship gold medals. Lugbill also has a silver medal in the C-1 event to his credit. Beginning in 1988, Lugbill won the first of his three consecutive overall individual Canoe Slalom World Cup Championships. In his only Olympic appearance in 1992 (whitewater canoeing was not an Olympic sport earlier in his career), Lugbill finished fourth after a technical violation dropped him from gold medal position. For his exploits in the canoe, Lugbill was chosen as USA Canoe Kayak’s Male Athlete of the Year in 1989, and is the only paddler ever to appear on the Wheaties box. Lugbill is a 2005 inductee into the International Whitewater Hall of Fame. He currently serves as the Executive Director of Sports Backers in Richmond, VA.