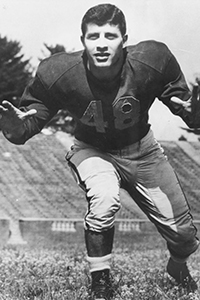 Joseph C. Palumbo ranks beside Bullet Bill Dudley when naming the all time greats at the University of Virginia.  He is considered the best defensive guard ever to wear a Cavalier uniform.

During Palumbo’s three varsity years, Virginia won 23 and lost only five games.  He was selected to the Associated Press and NEA All-American first teams in his senior year of 1951.  Palumbo lettered three times for the Cavs as a defensive middle guard and captained Virginia’s 1951 squad and earned All-America honors that season from both the Associated Press and NEA. In 1951, Palumbo received the Outstanding Defensive Lineman Award from the Touchdown Club of Washington, D.C., and was named the state of Virginia’s Athlete of the Year and participated in the Blue-Gray All-Star Game.  He is one of six Cavaliers to have his jersey retired (No. 48).

A native of Beaver, PA, Palumbo graduated from Virginia with a bachelor’s degree in economics in 1952.  He was drafted by the San Francisco 49ers but entered the U.S. Army during the Korean War after graduation.  He went on to a successful career as an insurance executive in Charlottesville.

Palumbo was selected for induction into the National Football Foundation’s College Hall of Fame in 1999.  He has been recognized by many as one of the most dedicated athletes in University of Virginia history.