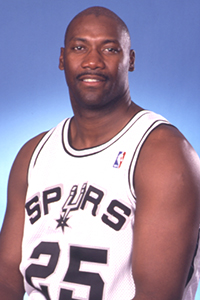 Jerome Kersey was raised in Clarksville, and attended Longwood College (now Longwood University), where he was a record-setting basketball forward and two-time Division II All-American. In 1984, Kersey was selected in the second round of the NBA draft by the Portland Trailblazers. He went on to spend 11 years with the team, finishing second in Blazers’ history in games played (831) and rebounds (5,078), third in blocked shots (621) and steals (1,059), and fourth in points (10,067). Kersey retired from play after an additional six years in the NBA, then coached for a brief time with the Milwaukee Bucks. Kersey was among the first class of inductees of the Longwood University Hall of Fame in 2005.