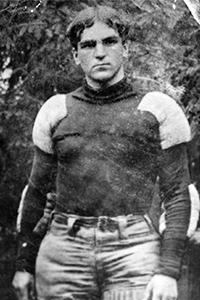 C. Hunter Carpenter, alias Mr. Walter Brown, entered Virginia Polytechnic in 1898. He used the alias of the fictitious Walter Brown during his early days at VPI because his father had forbidden him to play football.

This young man who was to become known as “The Greatest Gobbler Of Them All,” was born in 1883 and raised in Clifton Forge, Virginia. Carpenter starred as halfback at VPI from 1900-1903.  In 1903, the only time VPI had ever beaten the U.S. Naval Academy in football, Carpenter kicked a 46-yard field goal.  The ball carried 15 yards beyond the goal post for an actual 61-yard kick.  He played the entire game, most of the time without a jersey or stockings because they had been torn from his body. He donated that football to the Virginia Sports Hall of Fame, which is displayed in his showcase.

His chief ambition in those days was to beat Virginia. He accomplished that ambition when he left VPI in 1904 to captain North Carolina and led them to a glorious victory over Virginia. He returned to VPI the following year (1905) and was elected captain of the team. This Gobbler team was said to be the best in VPI history. He again achieved his greatest ambition by leading VPI to an 11-0 victory over Virginia.