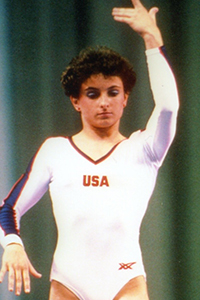 When other young girls her age were playing with dolls and running around the playground, Hope Spivey was a gymnastics standout with the potential for stardom according to scouts around the country.  Spivey, the NCAA’s all-time national record-holder for most perfect 10’s with 27 under her belt, showed that she was both talented and innovative throughout her 15-year career in national, international, collegiate, professional, and Olympic competition.

From humble beginnings in Suffolk, Virginia, Spivey was scouted by Ken Miller, who first introduced her to the Parkettes in Allentown, Pennsylvania.  At the young age of 13, Spivey’s parents allowed Hope to move to Allentown so she could ultimately train for the Olympics.  While attending Allentown Central High School, Spivey competed as a member of the US Senior National team.  In 1985, Spivey won the bronze medal in All-Around competition at the US Nationals Championship.  She consistently finished in the top 5 in all major US competitions in the years to follow.  In 1987, Spivey set a record score at the Pan American games as a member of the gold medal winning US team, making her a strong contender for the 1988 US Olympic team.

Following a 4th place team finish at the 1988 Olympics, Spivey focused her attention to graduating from high school and achieving a family first—college graduation.  Spivey added to her record-setting career at the University of Georgia, where she was named All-American in all four gymnastics events in a single year.  There, she was the first freshman to ever win the NCAA All-Around title, setting a record for the highest score in collegiate gymnastics history with a 39.525.  She was the second Georgia gymnast and only the fifth in collegiate gymnastics history to score a perfect 10.  She won the NCAA floor title twice, once with a meet record of 9.95.  She currently holds records for high scores in the vault (9.90) and balance beam (9.95) events.  In 1991, she was awarded the Honda Sports Award for the Top Female Collegiate Gymnast in the nation.  Additionally, she was a member of the World University Games, where she was a bronze medal-winner in vault competition.

Spivey continued her career after college, joining two professional gymnastics tours—the Reeses Cup Invitational of International Gymnastics and the Kurt Thomas Gymnastics Tour—as a competitor.  In true Hope Spivey fashion, she closed out her career with a 1st place floor routine in which she scored yet another perfect 10.  Later that year, she carried the Olympic torch through Athens, Georgia, on its way to Atlanta for the 1996 Olympic games.