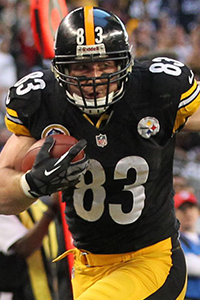 Heath Miller, a native Virginian, starred at quarterback for Honaker High School in the early 2000’s, however it was a position change at the University of Virginia that propelled Miller to greatness. Making the switch to tight end his freshman year, Miller would go on to hold every tight end record in Cavaliers football history. The 2002 First-Team Freshman All-American would go on to be selected First-Team all ACC in 2003 and 2004, as well as be a unanimous First-Team All-American, and John Mackey Award winner as the nation’s best tight end in 2004. The Pittsburgh Steelers selected Miller with the 30th overall pick in the first round of the NFL draft in 2005. Miller’s impact was immediate, as he quickly assumed the role of starting tight end for the Steelers, and was a key contributor to the franchise’s 5th Super Bowl championship that season. Miller would continue to be a vital component to the Steelers offense over the course of an 11-year career, which included a second Super Bowl championship in 2008, and two Pro Bowl selections in 2009 and 2012. Miller caught 592 passes including 45 touchdowns over the course of his career, and is one of only 12 tight ends in NFL history to eclipse the 6,000 receiving yard mark.