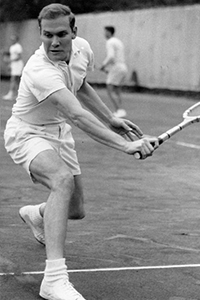 Harold “Hal” Burrows, Jr. is one of the most revered members of the tennis community of Virginia. It began when he won the Virginia State Boys Championship title in 1938 and 1939. He took the Junior title in 1941 and 1942. His career was interrupted when he joined the Army Air Force in 1942 and served overseas.

Hal attended the University of Virginia when he returned from the Army, where he won several Virginia State Championships (1946, 1947, and 1948). He later went on to the National and International Circuit and reached round 16 in the NCAA Tournament in Los Angeles, California (1948), the equivalent of being an All-American. In 1949, Burrows was runner-up to Cornell’s Dick Savit in the Eastern Intercollegiate.

During his career, he achieved victories over 33 different Davis Cup Players. While teaming with Straight Clark together they became a top ten-ranked team for five years. They were finalists in the National Clay Courts in Chicago, semi-finalists twice in the National Indoors in New York, semi-finalists and quarter-finalists in the Italian Championships, the French Championships, and at Wimbledon.

Hal and his partner, Clark, reached one of their greatest accomplishments against the superb team of Lew Hoad and Ken Rosewell.  In 1953, Hoad and Rosewell had won the doubles in Australia, France, and Wimbledon. They were trying for the Grand Slam in Brookline, Massachusetts when Burrows and Clark stopped them in four sets, 5-7, 14-12, 18-16, and 9-7. The next year Hal and Straight received their crowning honor when they were named to the Davis Cup Team – an honor only one other Virginian, Arthur Ashe has received.

Hal Burrows became a tennis pro when he gave up the tour. Before his retirement he concentrated on conveying his noted classical stroke to countless players at The Country Club of Virginia.  He has helped many players develop skill, sportsmanship and character; thus allowing many of them to turn professional.  Burrows was inducted into the Virginia Sports Hall of Fame in 1990.