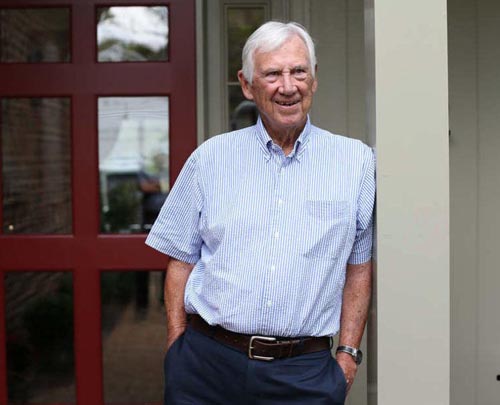 A native of Baltimore, MD, Gene Corrigan was a standout lacrosse player at Duke University from 1948 to 1952.  His prowess on the lacrosse field earned him a spot in the National Lacrosse Hall of Fame.

Even so, it was as a coach and administrator that he has made his mark on the world of sports.  In 1958, he came to the University of Virginia as a coach.  At that time, the athletics department had about a dozen full-time staff members. He was the soccer coach, lacrosse coach, and freshman basketball coach, and taught four PE classes per day.

He went on to work for a time as the Atlantic Coast Conference (ACC) sports information director, then as athletic director at Washington & Lee University.  He returned to Charlottesville in 1971 to begin a 10-year stint as director of athletics at UVA.  During that time, he hired Terry Holland to coach basketball.  Holland later followed this inductee as AD at Virginia.

In 1981, he accepted the position of athletic director at Notre Dame, where he hired Lou Holtz to coach the Fighting Irish football team.  Under Holtz’s leadership, the team returned to national prominence, which paved the way for Notre Dame’s administration to strike a deal with NBC for exclusive rights to the team’s home games.

In 1987, this inductee signed on as the third commissioner of the Atlantic Coast Conference.  He recognized the potential of the Florida markets, where a large number of ACC alumni were settling, and in the early 1990s led the conference’s expansion to include Florida State University, now a big-time ACC contender.

From 1995 to 1997, he served as President of the NCAA (1995-97), a top honor in intercollegiate athletics.  He was awarded the 2006 Marvin “Skeeter” Francis Award, presented in recognition of notable service to the media in their coverage of ACC sports.