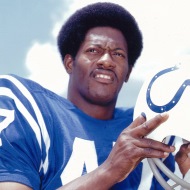 Charlie Stukes, a native of Chesapeake, Virginia, was one of the greatest athletes ever at Crestwood High School, starring in football, basketball and baseball. Stukes was a two-sport star athlete at Maryland State College, now University of Maryland Eastern Shore.  AT MSC, Charles earned All-Central Intercollegiate Athletics Association (CIAA) three years as a defensive back. He was also a standout baseball and basketball player. Following his senior year, Stukes was drafted in the 4th round of the 1967 NFL Draft by the Baltimore Colts.  Stukes was a ball hawk, finishing with eight interceptions in both 1971 and 1974, and 32 total in his career. He was a key contributor on the 1968 NFL Champion Colts team that appeared in Super Bowl III, as well as the Baltimore team that won Super Bowl V against the Dallas Cowboys in 1971.