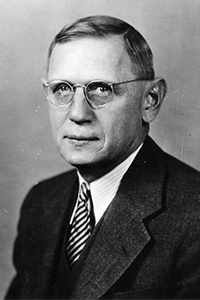 Clarence P. Miles, a native of Hanover County and a graduate of Richmond High School, now John Marshall High School, was one of the first builders of the foundation for intercollegiate athletics at Virginia Tech and throughout the South.   Although he had seen only one football game and had never played the game before enrolling at Virginia Tech, Miles became team captain as an offensive tackle linebacker for the Gobblers.

As a coach, Miles’ 1905 Tech team, which lost only one game to Navy 12-6, still ranks as one of Tech’s all time greats.  The bellwether of that aggregation, halfback Hunter Carpenter, is enshrined in the College Football Hall of Fame.

Miles’ most important contributions were in the foundation and direction of the Virginia Tech Athletic Association and of the Southern Conference, of which he was the first president.

Miles Stadium, where Tech played its intercollegiate football games from 1929-64 was named in his honor and it was Miles who initiated scholarship assistance to deserving athletes at Virginia Tech.

Miles’ efforts were major in helping to set the tempo for growth and improvement of sports in the state and throughout the South.