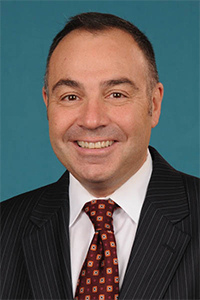 Bill Roth, a native of Pittsburgh, PA is most famous for the refrain, “From the blue waters of the Chesapeake Bay to the hills of Tennessee, the Virginia Tech Hokies are on the air!” Roth has been considered the “Voice of the Hokies” and  has begun every Tech sports radio broadcast with that refrain since his arrival in 1988. Roth has been the lead play-by-play announcer of Virginia Tech football and basketball, has served as the host of weekly coaches radio shows and has hosted the Virginia Tech Sports Today television show. From Sugar Bowls, to Orange Bowls, to NCAA Tournaments, Roth has described some of the greatest moments in Virginia Tech athletics history. He has been honored as Virginia’s Sportscaster of the Year by the National Sportswriters and Sportscasters Association numerous times. Roth graduated from Syracuse University in 1987 with a degree in broadcast journalism and was awarded the distinguished Robert Costas Scholarship in 1986. Bill also spent four seasons in professional baseball as a play-by-play broadcaster for the Triple-A Richmond Braves from 1993-96. At Virginia Tech, Bill has been inducted as an honorary member of the Hokies’
Monogram Club and was inducted into the Richmond Hokie Club Hall of Fame in 2008.